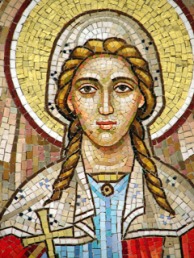 A couple of weeks ago I had a wonderful ramble around the Greek Glendi held at St. Barbara Greek Orthodox Church. I so enjoyed the guided tour of the church with its Byzantine art that I went back for a second wander, and took loads of photographs of just about everything (with their permission, of course).

The delicious and authentic Greek food that was served over the course of the four-day event was probably the biggest draw for the thousands of visitors who attended, but there was also plenty of dancing and live music highlighting Greek culture.

I especially enjoyed watching the kids dance in their colorful, elaborate costumes, and all of the parents and grandparents looking on so proudly. And those Loukoumathes! Light and fluffy honey puffs served with syrup and dusted with cinnamon – heavenly!

View all posts by sympatheticthreads

We cannot live only for ourselves.
A thousand fibers connect us with our fellow men; and among those fibers, as sympathetic threads, our actions run as causes, and they come back to us as effects. – Henry Melvill (1798-1871)